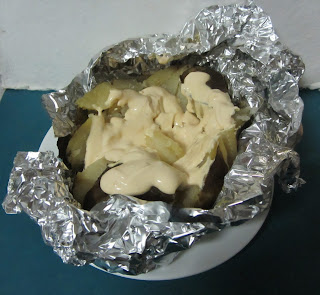 Sure, a potato can be baked in the oven, in the microwave, on a grill, even tossed into a campfire.  But sometimes on a busy or stressful day it's nice to know that your potato is ready and waiting for you, without your needing to do anything else to it.
1.  Poke potatoes in several places with a fork, rub with oil and sprinkle with salt.  Wrap in aluminum foil, place in 1 1/2 quart slow-cooker, and cook on low for 6-8 hours.
2.  In a small bowl, combine mayonnaise, sour cream, and chipotle with sauce.  Refrigerate, covered, for at least one hour to allow flavours to blend.
3.  Split potatoes, spoon sauce over top, and serve.

Robyn's notes: use as much or as little of the adobo sauce with the pepper as fits your preference for spice.  I'm very sensitive to it, so I use just the littlest bit.  The remaining sauce and peppers in the can will last a few days covered in the fridge, or can be frozen.  If freezing, pour into a zip-loc bag and seal, flattening the bag so that the peppers are in a single layer when the bag is laid on its side.  Freeze in that position.  Next time you need a pepper, you can break or cut off just the one with some sauce and allow it to thaw, without having to thaw the entire bag.  See Using Up Ingredients for other uses.  I find it really difficult to get small or medium russet potatoes anymore, unless I buy a 5-10lb bag.  If Jumbos are all that's available, one will serve two people.  It's been awhile since I had a baked potato come out as perfectly cooked as this: cooked through perfectly but not dry inside.  The sauce was a nice topping for it, though about halfway through the potato I had to start adding shredded cheese to cut down the spice.  But as I say, I'm very sensitive to heat.  I had some mashed potatoes in the fridge that I brought home from a potluck, so I saved a bit of this sauce to stir into them when re-heating.  That was ok, gave them a bit of a kick, but didn't provide much in the way of flavour, just spice.