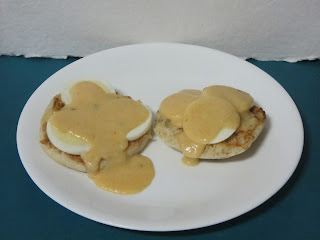 I seem to be on a bit of a chipotle kick recently.  Since so much of the can is left over after each recipe, I was brainstorming and came up with a bunch of ideas that I thought would be good to try.  Then I got pretty busy elsewhere in life and had a few days in a row where I needed quick, easy dinners.  So instead of spacing those recipes out as I usually would, I had chipotle-based dishes a couple nights straight.
1.  Toast English muffins, top with a single layer of egg coins, and season with about 1/8 tsp of salt and the pepper.
2.  In a small saucepan, melt butter.  Stir in flour, remaining 1/8 tsp salt, and pepper.  Stir in milk all at once.  Cook and stir over medium heat till thickened and bubbly.  Stir in Gruyere until melted; add chipotle pepper and let adobo sauce incorporate completely.  Pour sauce over egg-topped muffins.

Robyn's notes: a Mornay sauce is Bechemel (white sauce) with Gruyere and egg yolks added.  In this case the egg is not in the sauce, but under it!  I thought this worked out pretty well, I was pretty stingy with the pepper and adobo sauce, so it just added a little kick and some depth of flavour.  My only real complaint is aesthetic, I wish the final dish wasn't so pale!