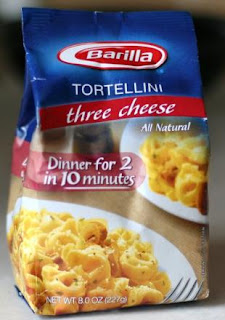 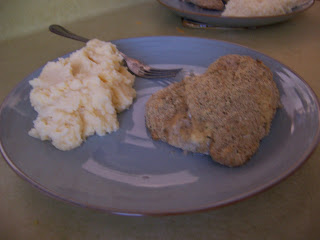 Robyn's notes: I used Progresso bread crumbs. This recipe keeps the chicken nicely juicy, and it's very quick to make. Not visually exciting, but quite good.

Robyn's notes: this was meant to be placed on Foccacia or Ciabatta bread and topped with cheese, but I didn't have any bread in the house, so I simply served it as a side as shown below. Because this called for 1/2 each of several vegetables, I prepped two meals at once so as not to waste the other half.

1. Preheat oven to 425 degrees F.
2. Heat the oil in a large skillet over medium heat. Add ground turkey and brown.
3. Stir in the onions, salt, pepper and garlic and allow to cook together for a couple of minutes.
4. Mix flour into the meat mixture and stir until a paste consistency is reached. Add beef stock to pan and stir in vegetables and herbs, the last few minutes, until combined.
5. Reheat mashed potatoes in a microwave for 5 to 6 minutes. Stir in granulated garlic and onion powder.
6. Spoon equal amounts of turkey mixture into two ramekins. Top with equal amounts of warm potatoes. Finally top with equal amounts of cheese. Bake for 10 to 12 minutes until cheese is melted and browned. Remove from oven and allow to cool slightly before serving.

Robyn's notes: I was using four-cheese mashed potatoes, so didn't add the garlic powder or onion powder to them. Because I can't have onions, garlic, peas, or carrots, I made half this recipe twice. First the version I could eat, omitting those steps, then as written above for my sweetheart. The photo below isn't the best, but he was hungry so I had to take it quickly.
Whipped up by Robyn at 11:28:00 PM 0 visitor(s) dished

1. In a small bowl, combine cracker crumbs and sugar, stir in egg white and butter.
2. Press onto the bottom and up the sides of two oven-safe custard cups or ramekins coated with cooking spray (crumb mix will not reach tops of custard cups).

3. Place custard cups or ramekins on a shallow baking pan or cookie sheet and bake at 325F for 6-8 minutes or until set. Cool completely on a wire rack.

5. Repeat with remaining yogurt, peanut butter cups, and fudge3. Cover and freeze for 6 hours or overnight. Remove from the freezer 10 minutes before serving.

1Don't have a food processor to make your crumbs, or don't want to pull out all the pieces (and later have to clean them) just to crush a few graham crackers into crumbs? Put crackers into a ziploc bag (make sure to seal it!), and crush with a rolling pin. If you don't have a rolling pin, you can use a mallet, or your fingers. Even a double pointed knitting needle will suffice as a roller to crush the crackers down to bits. It is possible to purchase graham crackers that have already been smashed for you, but in my opinion the extra expense is simply not worth it. You'll only save 2 or 3 minutes when you're crushing such a small amount of crackers. While I usually get the name brand graham crackers if I'm using them whole, when I'm buying crackers specifically for crushing I always get the store brand. I cannot tell any taste difference, they crush just as easily, and there is no visible difference in the crumbs.

2Often, when a recipe says “softened”, you can get away without doing so. For this one, if the frozen yogurt hasn't softened for several minutes, it will be nearly impossible to get it to spread into the crust and all that will happen is you'll have a firm blob of frozen yogurt stuck to your spoon, with graham cracker crumb crust clinging to it all over. Just take the frozen yogurt container out of the freezer when you put the crust cups into the oven and it should be softened enough by the time they've baked and cooled.

3Alternate option: do not add fudge to the top. Freeze as directed. Just before serving, heat remaining hot fudge and drizzle over the top of each mini-pie.

Robyn's notes: Approximating how much fudge is being drizzled on is fine, really, it's not like that stuff comes out of the bottle easily. To make it easier on myself, when I chopped the mini peanut butter cups, I chopped two at a time into four separate piles. Then, when it came time to sprinkle one-fourth of the total onto the pie, one of those piles was exactly the amount I needed. This is obviously not a "healthy" recipe, but it is made somewhat better for you in terms of calories through the use of egg substitute and frozen yogurt.