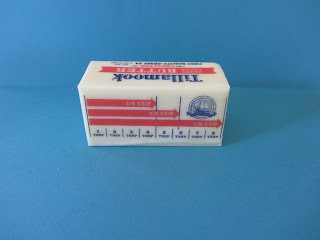 So, does it really matter that much just how a cook measures an ingredient?  Are all the different measuring cups and spoons truly important, or just a way for kitchen supply stores to increase sales?  Is weight actually a better method than volume?  Why do we do it this way, anyway?!

I've demonstrated the proper measuring process for a few ingredients, as well as showing why it makes a difference, in a video on youtube.  Go check it out!

Here in the US, most people use volume measurements of Cups, Tablespoons, and teaspoons.   This is easy and quick, but yes, the weight measures used in other countries are more accurate.  Many professional bakers here use weights for that very reason, and now that kitchen scales are inexpensive, more home bakers are going that direction.  I use both in my kitchen, but since US standard remains volume, all my recipes are written that way.

Three types of measuring equipment are needed for a standard home kitchen: a liquid measuring cup showing increments from 1/4 Cup to 1 Cup, a set of dry measuring cups, and a set of measuring spoons.  I always make sure to have the "extended" set of measuring spoons, which includes both a 1/8 tsp and a 1/2 Tbsp.  Since I make small dishes, I use those two far more than kitchens that regularly cook for 4 or more people.  I have not found those sets difficult to buy or any more expensive.  Dry measuring cups should have some heft to them, if the metal is too thin they may bend at the handle when you're using them, which can get messy and frustrating and means the possibility of spilling and inaccurate measures.  Avoid any sort of lip where the handle meets the cup, as it's a great place for food particles to get trapped and for bacteria to form over time if not scrupulously cleaned.  Measuring spoons are best if all one piece, whether that be metal or plastic--your preference--for the same reason.  I keep two liquid measuring cups in the house, a 4 Cup and a 1 Cup, some people like to have a third, mid-range as well.  The larger is not strictly necessary for most people, it's simply faster for measuring large amounts and I use it mostly when making jams to make sure I have the proper ounces of fruit pulp.

It is necessary to have separate dry and wet cup sets, though spoons are used for both. Wet measuring cups allow you to correct for the meniscus, or curve caused by surface tension. You may notice that when filling a dry measure with water, the water line can actually be higher than the top of the cup. This is more difficult to see and correct in a dry measure than in a wet.  It's also far more difficult to get a liquid right up to the top of a dry cup and then transport that to the work station without spilling.

While it won't appear in my recipes because I find it less clear and because I don't often write recipes that call for so much butter, sometimes a recipe will reference a "stick of butter".  As shown in the photo above, butter in the US is mostly sold in wrapped sticks, each of which is 1/2 Cup.  On the wrapping is printed lines showing Tablespoon measures, 1/4 Cup, and usually 1/3 Cup.  By simply slicing along the proper line, the needed amount of butter is measured out quickly and easily.  If using Amish roll butter or other types that don't come in a stick form, the butter would be measured in a spoon or dry cup.

Ingredients like softened butter, shortening, peanut butter, or others of that consistency are measured in a dry cup, even if they are being used as a liquid in the recipe (for example, when creaming butter and sugar for making cookies, both those ingredients are considered liquids, both would use a dry cup).  If measuring something very sticky, like peanut butter or molasses, giving the measuring cup a quick shot of cooking spray first can help release it later.  Push the ingredient into the cup with a small spatula to fill all air pockets, spoon more in, repeat, and level off the top.  Another option is one I've taken advantage of, which is a push-up measuring cup.  This has a plunger action that pushes the ingredients out without leaving a bunch behind in the cup.  I did a lot of reading of reviews before buying mine, and a lot of brands have complaints about how quickly the markings rub or wash off, making the item useless.  I ended up purchasing the "Adjust-A-Cup" brand, from Amazon, and while I don't use it often and I only hand-wash (we don't have a dishwasher), I use it a lot during the holidays when I measure molasses for gingerbread and I've had it for 3 years without any loss of markings on the sides.

We have Fannie Farmer to thank for standardized measurements, as her Boston Cooking School Cook Book, published in 1896, introduced the concept, as well as being specific about level measures.  Prior to her work, recipes generally called for ingredients in amounts compared to other objects, such as butter "the size of an egg".  If you've ever seen eggs in the farmyard, you'll know that this can vary widely even if you're exclusively talking about chicken eggs, and any homemaker of the time could easily have interpreted that size to her own experiences, ending up with unsuccessful recipes.  Farmer's work, and all the efforts of those at the Boston Cooking School in the culinary science field, have led directly to the success and understanding of food we enjoy today.
Whipped up by Robyn at 10:41:00 AM 0 visitor(s) dished 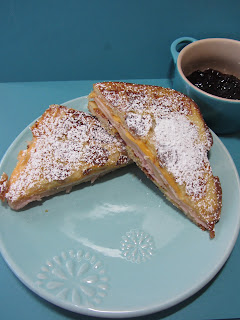 Who wants to deal with heating up oil and avoiding splatter burns, just to make a couple sandwiches?!  Here's a great way to use a countertop appliance to get a nice crispy meal that's both savoury and sweet in all the right ways.
1.  In a shallow dish, combine egg, milk, sugar, and orange peel.  Dip bread into egg mixture to coat both sides.  Place bread slices on a preheated waffle maker in a single layer.  If desired, sprinkle each slice with pecans.  Bake according to manufacturer's directions until golden brown.
2.  Place 2 American cheese slices on two bread slices; layer with turkey, Swiss cheese, and ham.  Top with remaining bread; butter outsides of sandwiches.
3.  Toast sandwiches in a skillet on medium heat for 1-2 minutes on each side or until cheese is melted.  Dust with powdered sugar, serve with jam.

Robyn's notes: this is still an indulgence, even without the frying that is a standard part of Monte Cristo sandwiches, but it feels less greasy.  These went quickly but in my opinion definitely needed the jam as a dipping sauce, it just didn't seem exciting without.  Watch me demonstrate this recipe on youtube!