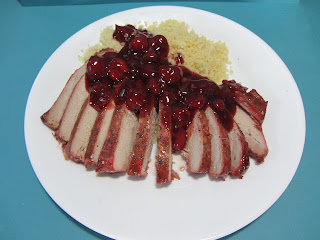 I'm really quite proud of this recipe.  Here's what happened: I'm recipe testing a dessert (hopefully soon to appear!) which will require half a can of cherry pie filling.  As has been shown time and again here on Our Small Table, I don't like using "half a can" of anything, unless I have a use for the remainder.  I was also working on the recently-posted Pork Tenderloin with Horseradish Sauce, which meant I had half a pork tenderloin left.  Same problem.  Well, cherries and pork go together, right?  Why not combine my two orphaned ingredients?  So I sat and brainstormed what else should go in, and the cooking method I wanted to use, and I really thought it would take several attempts to get it just right.  Lo and behold: delicious on the first try!
1.  In a small bowl, stir together pie filling, garlic, balsamic vinegar, and ginger.  Set aside.
2.  Season pork with salt and pepper on both sides.  Place in a 1-1/2 qt slow cooker.  Pour cherry mixture over top of pork, covering completely.  Cook on LOW heat for 4.5-5 hours or until meat thermometer inserted at thickest part of meat reads 160°F.
3.  Remove pork from slow cooker and set aside to rest before slicing.  Meanwhile, pour sauce from slow cooker into medium saucepan.  Bring to a slow boil over medium-low heat and reduce for 5-6 minutes.  Slice pork and spoon sauce over top.

Robyn's notes: I didn't think about a side dish until the pork was done cooking, so I needed something that would cook fast, while the sauce was reducing.  Since I didn't have any instant rice in the cupboard, I chose plain couscous.  This was really good.  I got a little nervous at around the 4 hour cooking point, because I could really smell the vinegar and thought it would overpower the dish, but it turned out to be just the right amount. 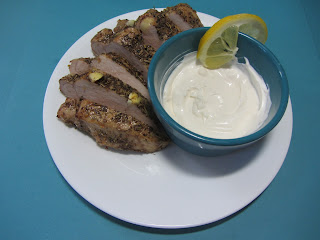 With just a few steps of prep-work and about half an hour in the oven, a delicious pork dinner that can be served hot or cold.

1.  In a small bowl, combine the steak seasoning, rosemary, and thyme; rub over meat.  Using the point of a sharp knife, make eight slits in the tenderloin.  Insert garlic into slits.  Place meat on a rack in a foil-lined shallow roasting pan.  Drizzle with vinegar and oil.
2.  Bake, uncovered, at 350°F for 30-40 minutes, or until a meat thermometer reads 160°F.  Let stand for 10 minutes before slicing.
3.  Meanwhile, combine the sauce ingredients; chill until serving.  Serve with pork.

Robyn's notes: I enjoyed this quite a bit more than I expected.  Pork was not in heavy rotation in my house when I was growing up (aside from ham and bacon), which means that my main exposure to it for many years was pork chops at buffets and potlucks.  That's not the best example of the meat, as it tends to be dry and somewhat tasteless in those cases.  This was juicy and tasty and I would absolutely have it again.  Watch me demonstrate this recipe on youtube!