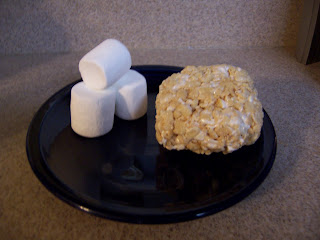 I'm a big fan of Rice Krispie Treats, but the standard recipe makes 24 squares, and I find it challenging to have a pan of them in the house and not return to it over and over until they're all gone in one evening. This recipe makes 3 squares if you cut them the size Kellogg's bases their nutritional analysis on, but it makes one big square to my way of thinking.
1. Melt butter and marshmallows together in microwave-safe bowl on high for 1 minute, stirring well to combine. Move on to step 2.
OR
1. In saucepan, melt butter and marshmallows together over low heat. Move on to step 2.

2. Stir in cereal until well coated. Place on a square of plastic wrap and fold up, molding the treat into a square. Allow to cool. 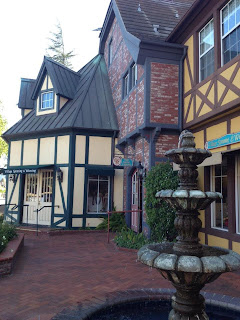 We've just returned from a trip to Solvang, an old Danish colony on the Central California Coast (Santa Barbara County). One of the real joys of a visit to a place like Solvang is experiencing the food. Scandinavian cuisine in general doesn't seem to get enough credit, but fortunately most people are well aware of the quality of Danish pastries and baked goods. We certainly enjoyed ourselves, being sure to visit some bakeries and to get æbleskiver alongside breakfast one morning.

Coming back, though, I decided that while we'd taken advantage of plenty of sweet treats (Danish waffles with buttercream and raspberry, eclairs, cheese bread, butter ring, etc.), we hadn't had much in the way of Danish entrees. My dietary restrictions made it somewhat difficult, but I knew there must be traditional dishes we hadn't stumbled across that I'd be able to eat. So upon returning home I did some research and discovered the dish known as millionbøf. Literally translated it means "million steak", as the meat is minced into many small pieces. I adapted this recipe from several informal versions I found and translated online. I do own one Scandinavian cookery book, and our local library has one other, but both are from the 1960s and focus mainly on herring dishes, so I had to rely on Google and myself for this (in other words, Danes, sorry if it's not exactly as it would be traditionally). 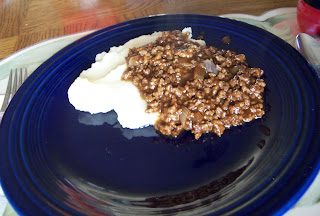 1. Sauté onions in fat of your choosing (I used butter). Add ground beef and brown for 3-4 minutes, until no longer pink, breaking up the beef completely with wooden spoon into tiny bits. Drain.
2. Add beef stock, reduce heat and simmer 15 minutes.
3. Whisk flour and water together and pour into beef mixture, stirring until mixture becomes thicker. Season with salt and pepper. Add kitchen bouquet and stir until fully combined. Serve over Mashed Potatoes.

Robyn's notes: before beginning, I patted the ground beef all over with a paper towel, to dry it. Drying beef helps it brown and in this case also made it easier to break up the meat into the small bits, so that it didn't clump together as ground beef sometimes will. Onions make me ill, so instead of finely dicing mine, I coarsely chopped them. Makes it easier to find them when I'm picking them out of my portion later. I might add some paprika when making this again, paprika being a common addition to the dish. Kitchen bouquet is a browning and seasoning sauce found in US grocery stores.

*** 3 Stars: Good. At least one of us liked this enough for me to make it again, but not often
Final note: we took the photo at the top of this entry just outside of the Village Spinning and Weaving store, where the owners were kind enough to spend a good half hour with me so that I could try out every spinning wheel they had assembled. I can easily recommend their shop, as well as Danish Mill Bakery, Mortensen's Bakery, and The Red Viking Restaurant.
Whipped up by Robyn at 7:18:00 PM 0 visitor(s) dished