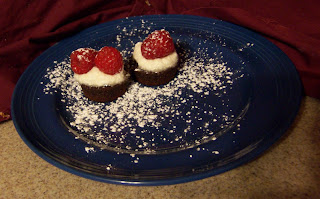 The original recipe this was based on was Chloe's Vegan Chocolate Strawberry Shortcake Cupcakes, by Chloe Coscarelli. I had never heard of Coscarelli, or her experience winning Food Network's Cupcake Wars...or, for that matter, the show. I learned of both when I recently flipped through an issue of Sunset magazine that included Chloe's recipe. Or did it? The recipe on Coscarelli's site is not the same as the recipe in Sunset magazine. Both are credited as being "the first vegan recipe to win on Food Network!". Regardless, I'm not fussed about which version was actually the filmed recipe, as I've never watched the show. I reduced the Sunset version twice, changed the cupcake size, an ingredient, the cooking time, and the assembly process to come up with what I bring you today.

Cupcakes
Frosting & finishing
1. Preheat oven to 350°F. Grease 12-cup mini muffin pan.
2. Make cupcakes: In a large bowl, whisk together flour, sugar, cocoa, baking soda, and salt. In a separate bowl, whisk together water, oil, vinegar, and vanilla. Pour wet mixture into dry mixture and whisk until just combined.
3. Divide batter among cupcake cups. Bake until a toothpick inserted into a cupcake comes out clean, 9 to 12 minutes. Let cupcakes cool completely in pan.
4. Make frosting: Using an electric mixer, beat shortening, 2/3 cups powdered sugar, and the vanilla together to mix. Beat in nondairy milk until frosting is smooth and fluffy.
5. Run knife edge gently around cupcakes to loosen and remove from pan. Smooth about 1 Tbsp frosting onto each cupcake and cover with one or two raspberries Put remaining 1 tsp powdered sugar in a fine-mesh strainer and dust cupcakes with sugar.

Robyn's notes: The amount of raspberries is not exact because it depends on your preferences and the size of your raspberries. I put only one raspberry on some, and two on others, large raspberries meant only one would really fit, smaller ones meant I could fit two. I found the cupcake batter to be alarmingly thin, but it baked up well. The cupcakes did not rise practically at all during baking, so filling the pan nearly full is fine. Mini cupcakes bake quickly and can go from "almost ready" to "overcooked" alarmingly fast, so start checking them at 9 minutes and if they're not yet ready check them regularly until they are. Although it may seem a waste of time and cleaning energy to use an electric mixer for such a small amount of frosting, it's worth it because it gets the right amount of air into the frosting. I used regular Crisco shortening because it was what I had on hand, and I checked the local grocery to find that they had exactly two shortening options: Crisco, and Crisco butter-flavoured. Both are hydrogenated. It did not seem to make any difference in the recipe. I used Silk brand soymilk, plain flavour (not vanilla), because it's the type of soymilk I always have in the house. Do not be fooled into thinking that because this is a vegan recipe that makes it healthy. Going off of the nutritional facts provided in Sunset, a single one of my mini cupcakes will be somewhere around 100calories and one is not nearly enough! Assuming that you're not going to eat all 12 in a single sitting, I suggest only frosting the cupcakes you plan to eat, then refrigerating the remaining frosting and raspberries and storing the remaining cupcakes in a sealed container to be frosted and finished when you're ready to eat them.