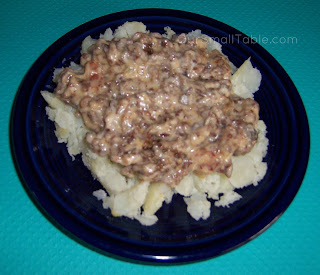 This may not be the prettiest meal I'll ever post, but it is another nostalgic comfort food dish for me.  I've reduced it heavily from the recipe my mom made when I was a kid.  When I first moved out, I was also moving out of state, far enough that visits would be 1-2 times per year.  One of the things my mom sent with me was a binder of recipes that I'd loved growing up.  This was in there, and that's where I've taken it from.  I don't have any idea where she originally got the recipe.  Don't forget to prepare the potatoes, however you prefer to bake them (I actually use the microwave when they're being served under a dish like this).
1.   Place ground beef and bacon in skillet; cook and stir until beef is browned.  Add onion and cook until just tender.  Spoon off excess fat.
2.  Blend flour and seasonings into meat; stir in soup.  Reduce heat and simmer, uncovered, for 10-15 minutes, stirring often.
3.  Stir in sour cream.
4.  Serve over baked potatoes.

Robyn's notes: this is a very filling meal, in my opinion.  You will be using half of the can of condensed cream of mushroom soup, see "Using Up Ingredients" at the top of the page for suggestions on what to do with the rest of the can.  The recipe says this can also be served over egg noodles or toasted hamburger buns, but I like it best over baked potatoes, so that's all I'm listing in the recipe itself.  It was hard to find a good skillet size for this, I used a 10-inch, which was perfect for browning the beef, bacon, and onion, but once it got to the simmering it seemed a bit large.  Be sure to scrape the bottom of the pan when stirring.  I let the skillet sit over low heat for about 2 minutes after stirring in the sour cream, just to let it thicken up a bit before spooning it over the potatoes.  Probably only a 4 star recipe, but the nostalgia factor gives it a fifth star.