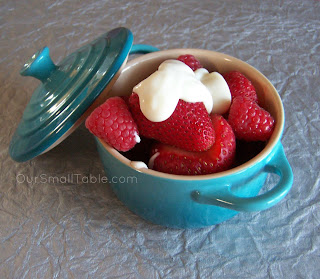 I took the ratios for this from an episode of Alton Brown's Good Eats. It's easy to upsize if necessary, as this makes quite a small amount of dip.  The show used 1 Cup of sour cream, to give a sense of scale.
1.  In a custard cup or small glass bowl, heat honey in microwave for 20-25 seconds.  Whisk in sour cream.  Serve with fruit.

Robyn's notes: this was a way to keep from wasting even the tiniest remaining bit of sour cream after having used it in several recipes.  It was good on strawberries, but I think where it really shone was on raspberries. If making a large batch, the honey should be warmed on the stove in a saucepan, but for such a tiny amount as this that would be ridiculous.