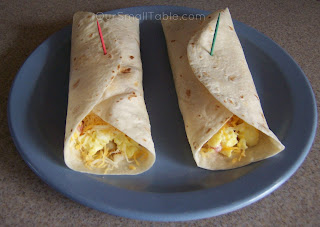 For most of my career, I chose to work the night shift (aka Mids/Graveyard).  I really preferred it to either Days or Swings, for a lot of reasons, but there were a few aspects of working nights that were challenging.  One of those is the food issue.  If I was asleep from approximately 8am until 3 or 4 in the afternoon, then when I woke up I wasn't likely to be in the mood for dinner foods, even though it was the regular dinner time.  My meal during my shift (I usually tried to get the 2:30 or 3am lunch break) was never anything particularly special or filling, because it's hard to get enthused about a meal at that time of night, especially when you only have 30 minutes to reheat and eat.  When I got home from work I was ready for a nice big meal...but generally too tired to fix one after a 10-14 hour shift.  So co-workers and I often went to either a particular pancake restaurant or a small Mexican cafe that opened right before our shift ended.  At the latter, I always ordered a breakfast burrito, and the ones I got there are still the best I've ever had.  A few years ago I mentioned on Twitter that I was going to have a breakfast burrito for dinner, and was horrified at how many people asked me what that was.  1.  Heat oil in medium skillet over medium-high heat.  Carefully add potatoes to form an even layer.  Cover and cook over medium-high heat for 4 minutes.
2.  In a nonstick 8-inch skillet on another burner, warm tortillas one at a time over medium-low heat.  Set aside and cover to keep warm.  Beat together eggs, milk, salt, and pepper in a small bowl.
3.  Remove lid from potatoes, turn them, and reduce heat to medium.  Cook, uncovered, for 4 minutes without further stirring.
4.  Melt butter in small skillet used to warm tortillas.  Add egg mixture and cook slowly, scrambling with a silicone spatula.  As soon as the egg starts to set, add ham and continue to cook and stir together until cooked to your preference.
5.  Spoon approximately 1 Tbsp cheese down center of each tortilla.  Top with half of potatoes onto each, then half of the egg mixture.  Cover each with remaining cheese.  Fold over sides of tortillas and secure, if needed, with a toothpick.

Robyn's notes: this is a simple dish, but it can take some trying to get all the timing right, since both skillets are working at the same time and everything has to finish at just the right moments to keep anything from getting overcooked or cold from sitting.  I always have a bag of these potatoes in the freezer.  Likewise, I always have 4 Cheese Mexican blend shredded cheese in the house, it's more my standard than regular cheddar, so that's what I use.  Just before removing the eggs and ham from the skillet, I like to stir a bit of the cheese (maybe a Tbsp) into them so it gets all nice and warm and melty and gooey and integrated, instead of  just being layers.  Some people like to add salsa or onions and peppers or a bit of hot sauce to their breakfast burritos, since I can't eat any of that I don't.  The ham can be replaced with bacon or sausage, or left out entirely for a vegetarian version.  Without ham it might be a good idea to add a third egg, as I don't think it's as hearty a meal.  Although I've got a 'breakfasts' label on this, I'm much more likely to serve it as a dinner these days.