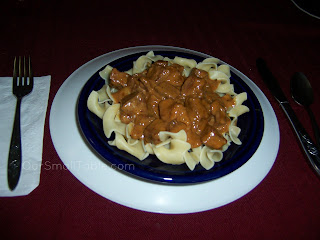 This is a very reduced version of a recipe my mom made for us a lot when I was growing up.  I don't know how much similarity it bears to actual Hungarian dishes, I've done a lot of travelling but Hungary is not one of the places I've visited.  It is, for me, a touch of childhood and the smell of it cooking means comfort.  Plan ahead, this recipe has a long cook time.
1.  In medium bowl, toss meat cubes with flour to coat.  In Dutch oven or 10-inch skillet, brown meat cubes in oil until well browned on all sides.  Add onions, paprika, salt, pepper, and beef broth.  Cover and cook over low heat for 1-1/2 hours or until meat cubes are tender.
2. Shortly before serving, cook noodles as instructed on package.  Drain.  If desired, toss with butter and poppy seeds.
3.  Add sour cream to meat mixture and cook over low heat until heated through, stirring constantly.  Serve over noodles.

Robyn's notes: It may seem like 1 Tbsp of flour isn't enough to coat 1/2 lb of meat, but it really turns out to be enough.  I also tap off as much excess flour as possible before putting it in the pan, so it doesn't get gloppy.  I used a ten-inch skillet.  When browning the meat it was the perfect size to accommodate all the cubes with space to turn them once, and when it came time to cover and cook I pushed all the ingredients to one side of the pan together.  I checked the status of the meat several times during the 90 minutes of cooking, stirring things around and making sure there was still enough liquid, as my mom had warned me I might need to add more broth.  She generally uses her electric skillet to make this for 4 people, and in the electric skillet she adds more broth.  I didn't need to add another drop.  I can't eat seeds, they cause a lot of pain for me, so I just leave the poppy seeds out entirely, I don't think it changes the taste or enjoyment at all.  Probably more a 4 star dish if it didn't have such nostalgic feeling for me.  As it is, I won't make it often, but will make it for many years to come, 5 stars.