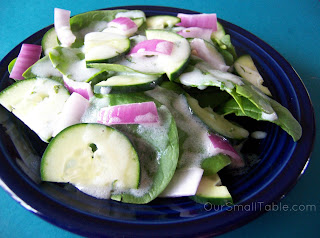 I don't really like to buy salad dressing unless I'm using it to cook with.  I'd much rather make my own, as it's fresher and can be made in small amounts as needed.
1. Whisk the lemon juice and honey in a bowl. In a separate bowl, whisk the yogurt and olive oil together. Add the yogurt mixture to the lemon juice mixture in a thin stream, whisking constantly. Stir in mint, then add the salt and pepper to taste. Cover and chill the dressing for up to 24 hours.
2.  Combine the spinach, cucumbers and onion in a large bowl. Season with a little salt and pepper if desired. Add just enough dressing to moisten the salad. Toss to coat, and serve with extra dressing on the side.

Robyn's notes: My sweetheart prefers that I not peel or seed cucumber, as lots of nutrition is lost in disposing of the peel, so I just wash it well and slice it into half-coins.  This is a side salad, not an entree salad, and was made to use leftover cucumber, red onion, and yogurt from recent meals.  I can't eat spinach, cucumber, or red onion, so I can only go by his opinion, which was that this was "fine".  Dressing smelled nice, I can say that!