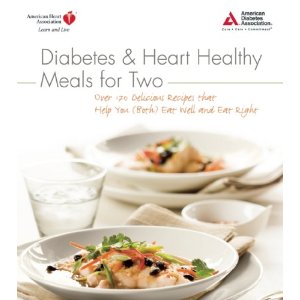 
Neither of us is diabetic, nor do we have heart problems, but I think the best way to keep those statements true is be careful before issues start.

There are more than 170 recipes in the book, in the following categories: Appetizers, Snacks, Beverages; Soups; Salads; Seafood; Poultry; Meats; Vegetarian Entrees; Vegetables and Side Dishes; Breads and Breakfast Dishes; Desserts.  There is a very short (6 pages) introduction on making healthy food choices, and a double index that isn't fantastic because it lists the recipes first by name, then by "subject", and many of the subjects are the same as the chapter headings.  It's just as easy for me to go to the first page of the poultry chapter and look at the recipe list that's printed at the start of the chapter with page numbers, as it is for me to go to the index, find the poultry section of the index, and look at that list of recipes.  If the index were sorted more specifically, for example chicken vs turkey, that would be more useful.  There are a few pictures in the center of the book, all in full colour, showing a total of 15 recipes.

Lots of recipes that look tasty, good nutritional information, and real "for two" recipes, none of that "freeze leftovers" nonsense that some small-yield cookbooks try. A couple recipes do call for "half a can" of diced tomatoes or whatever, which is frustrating, but most either use all of an ingredient or explain how you can purchase just half to begin with. There are a surprising number of processed ingredients in some of the recipes, and in order to make the nutritional analysis accurate you have to be careful to note that most of the ingredients required are "fat-free" or "low fat" or "low sodium" versions.


I've cooked from the book on several occasions, and have had good luck with everything I've tried, but for one soup that was far too heavily spiced. The dishes are good, filling, and the recipes are complete and easy to follow. Nothing so far has felt as if we're eating "light", there's no flavour lacking.  Admittedly, I sometimes use a recipe but don't get the "fat-free" sour cream that it calls for, but mostly I follow their guidelines.

The vast majority of the entrees are in the 200-300 calorie range (some fall below that, a few go as high as 450 calories), and the sodium levels are generally amazingly low.  There are a lot of options, and recently this has been a cookbook that I find myself checking fairly often.  It's nice to have a good meal that is also relatively good for us.
Whipped up by Robyn at 4:10:00 PM