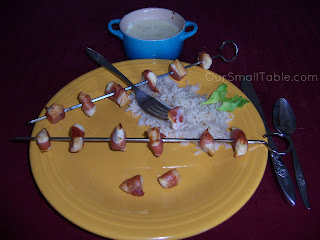 I know I just wrote a recipe for a non-traditional Chicken Cordon Bleu 6 weeks ago, but here's how this new one happened...

I was up late one night recently, sick, with a fever that made it difficult to get comfortable in bed, and so out on the sofa.  I flipped through channels until I gave up and settled on an episode of Iron Chef America (a show I'd never watched because I hadn't really enjoyed the episodes of the original Iron Chef that I'd tried).  At one point a chef put a plate under the salamander, and as the host wondered aloud what was on it, the chef replied that it was a provolone sauce.  I thought to myself "how great would that be, a cheese sauce on the plate, under the food, broiled a bit to get it hot and brown and rich and gooey and delicious".  Since I (once again) had some Gruyere in the house needing to be used, I decided to write a recipe with a Gruyere sauce as the base.  I immediately ran into a major problem, namely that of not wanting to shatter my dinnerware.  Obviously I don't have a salamander (lizard or professional kitchen equipment), but I'd assumed I'd use the broiler.  The two kinds of dinner plates I have are newer Fiestaware and unknown-age Corningware.  Some vintage Fiestaware can go under the broiler, the new stuff can't (shouldn't.  People risk it and sometimes win, sometimes lose.  The company says "don't").  Same with Corningware.  My Corningware is possibly old enough (I got it from a relative who was 79 when she died 12 years ago, and I suspect she'd had it for decades), and it doesn't say "not for stovetop or broiler use" on the back like some Corningware does, but why risk it, especially when it would mean a recipe that few people could safely duplicate?  So I've switched my beautiful idea to a dipping sauce, which ended up not needing to be broiled (see notes below), but I still think how great it would have been to serve a deep blue plate with a bubbly brown-edged white Gruyere sauce pooled in the center and a couple skewers of wrapped chicken slanted across it.

Chicken
1. Preheat broiler.  Cut chicken into 1-inch cubes.  Slice each piece of prosciutto lengthwise into 1/2-inch thin strips, then slice each strip into 3-inch lengths.  Using the back of a spoon, gently spread Dijon mustard thinly onto one side of each strip of prosciutto.  Wrap each piece of chicken with a strip of prosciutto, and secure on skewers (about 5-6 wrapped chicken pieces should fit onto each 10-11inch skewer).  Broil, 4-6 inches from heat, 3-4 minutes per side.
2.  While chicken is broiling, make Gruyere sauce.

Gruyere Sauce
1.  In a small saucepan, melt butter over medium-low heat.  Add flour and stir until combined, do not allow to brown.  Gradually whisk in the milk.  Increase heat to high and bring to a boil, stirring constantly.  Reduce heat and simmer until sauce has thickened.
2.  Remove from heat.  Add cheese, stir until melted, season with pepper.  Pour sauce into mini cocotte or ramekin for serving.

When chicken has finished cooking, remove from skewers and serve with rice, sharing the Gruyere sauce between both people to use as a dipping sauce.

Robyn's notes: Normally if I were writing a basic cheese sauce like the one above, it would include salt for seasoning.  But since this sauce is being used alongside a dish with prosciutto in it, I've left the salt out.  Prosciutto brings enough of a salt flavour to a dish without adding additional sodium to the sauce.  Prosciutto can be difficult to slice, and I recommend taking the package out of the fridge at least 10 minutes before starting to cook.  Try to carefully lay a single slice on your cutting board and cut with the end of a sharp knife without moving the meat.  It has a tendency to stick to itself and its packaging and to shred, if it does simply try to make it work by wrapping what you can around the chicken.  If using wooden skewers, soak them in water for at least 20 minutes before putting the chicken on.  This helps the food slide on and off better, reduces the chance of slivers of wood breaking off with the movement of the food, and in some cases can help keep the skewers from burning all the way through.  They are still likely to char at the ends.  I did broil the Gruyere sauce alongside the chicken for the last 2 minutes of cook time, but it didn't brown on top and just gave the sauce a bit of a skin, so don't bother.  The sauce will be nice and hot from having just been made, and the broiling wouldn't add anything to it.  I made half of the chicken with Dijon mustard in the wrapping and half without, because I don't actually like the taste of Dijon, despite cooking with it pretty often, and I wasn't sure which would be better.  The pieces without were good, but the pieces with the Dijon had a wonderful depth of flavour that made a big difference, so I'm definitely including it in the recipe.  It doesn't actually taste like Dijon, just adds a little needed something to the dish.  Unless every bite of chicken is absolutely covered with dipping sauce, there will be some Gruyere sauce left over.  I simply couldn't write the recipe any smaller or it would be nearly impossible to make the roux.  So if there's enough left to save in a covered container in the fridge, it can be served over vegetables (especially cauliflower or broccoli) the following day.  We were both really pleased with this dish, and while prosciutto is too expensive to buy regularly, it'll definitely go on the list of favourites for an occasional splurge.