The notes on this are kind of long, but that's because there are several options for browning the tops of the crème brûlées.  Plan ahead, these need lots of resting time in the fridge. 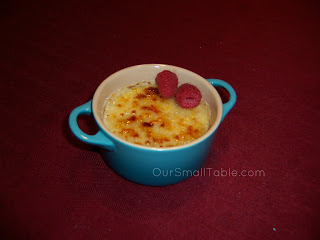 1.  Preheat oven to 325°F.  Combine cream, vanilla bean and its scrapings in a medium saucepan over medium-high heat and bring to a boil.  Remove from heat, cover, and let sit for 15 minutes to infuse.  Remove the vanilla bean and reserve for other use.
2.  In a medium bowl, whisk 2 Tbsp + 2 tsp sugar and the egg yolks until they are well blended and just starting to lighten in colour.  Add cream slowly, stirring continuously.  Pour mixture into mini cocottes.  Place the cocottes into a roasting pan and add enough hot water (not boiling) to the pan to come approximately halfway up the outside of the cocottes.  Bake until custard is set but still jiggly in the centers, approximately 40-45 minutes.
3.  Remove cocottes from roasting pan and place them in the refrigerator for at least 2 hours, up to 3 days if making in advance.
4.  Remove the cocottes from the fridge 30 minutes before beginning to brown them.  Spread the remaining sugar on top of the cocottes and melt with a kitchen torch to create a crispy topping.  Allow to rest for 5 minutes before serving.

Robyn's notes: first, and most importantly, the taste.  This was far too rich for my liking, I simply couldn't eat it without adding a raspberry to each bite to add some freshness and cut through the strong rich custard.  The raspberries weren't meant to be more than a pretty garnish.  My vanilla sugar is not ready to be used yet, so I used regular sugar, if I'd used vanilla sugar it would have been way over the top (and I love vanilla).  I don't have a lot of experience eating crème brûlée, but my first (and favourite) was at Neiman Marcus years ago during the holidays, and theirs included Grand Marnier.  I may consider using some when trying this again.  Secondly, the process of browning the sugar.  I went to Williams-Sonoma and priced their kitchen torches last week ($40), as well as carefully reading every line of text on the packaging.  I simply cannot afford to spend that kind of money on a kitchen tool that has very few uses.  The packaging said that the torch uses butane, and after a lot of research, I determined that Bic long-handled lighters also use butane.  I am not saying that it's safe to use a Bic lighter for a food product.  As a matter of fact, I'm saying that it's probably not safe.  Probably nobody should do it.  But I decided to give it a try anyway.  It was a pain.  The lighter is not meant to be used for more than 30 seconds straight, and while I decline to say whether I kept it lit longer than that (ahem), I had to be careful that I didn't keep it lit long enough to become a danger.  The biggest differences between a kitchen torch and a Bic lighter are that the kitchen torch a) has a stronger flame, and b) has a hotter flame.  This means that the sugar melts much more quickly and over a larger area.  The Bic lighter took half an hour to melt just the top of one of these mini crème brûlées (we're saving the other to try another technique tomorrow, which I'll get to shortly).  It was very tiring and frustrating.  The sugar did melt, the caramel disc did solidify, but it was not worth the work.  The other option, which we'll be trying tomorrow on the second crème brûlée, is to sprinkle the sugar over the top, then place it under the broiler for a few minutes (be careful!  Not all ramekins are broiler-safe!).  The problem with this is that it subjects the entire dish to increased heat, which changes the consistency of the custard beneath the sugar.  I was trying to avoid that, but we'll see tomorrow how it goes.  Update: the broiler option does work, but as expected it changed the consistency of the custard, in a way I didn't like.  It became much like curdled milk, basically liquid with some strange chunks.  The final option, which I will not be trying at this time, is to flambé the sugar by splashing it with liquor and lighting it up.  I don't currently have either flambé experience or a good fire extinguisher, so I'll be letting that option pass me by for now.