I've got 3 more dessert recipes written that need to be tested, but I think they'll wait a little while.  We're starting to get a little overloaded on sweets, and I do have a couple of entrees also waiting for testing, so those will take priority after this.

Flourless chocolate cakes seem to wax and wane in popularity, having moments of being everywhere you look and moments where it seems no one has ever heard of them.  This one is similar to the "molten" or "lava" cakes that tend to be available in restaurants, but with a more homey look.  Speaking of which, the towel in the picture below was embroidered by my late grandmother in the 1950s.  It's been getting near-daily use in the years since, too, so for those of you who enjoy embroidery but think you have to choose between an item that's utilized and one that's cherished?  Have hope!  Sometimes you can do both. 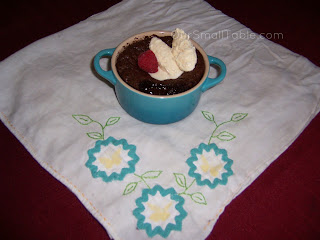 1.  Preheat oven to 350°F.  Chop the chocolate into small pieces and melt, with butter, in a double boiler or metal bowl set over a saucepan of barely simmering water, stirring until smooth.
2.  Beat egg yolks and sugar in a bowl until pale yellow.  Remove top of double boiler or bowl from the heat and combine egg mixture with chocolate.
3.  Whisk egg whites until stiff peaks form (stiff peaks stand on their own completely without falling over.  Do not overbeat), fold into chocolate mixture.  Pour batter evenly into two mini cocottes or individual casserole dishes/ramekins.  Bake 18-22 minutes.  Allow to cool for 5 minutes before serving.  The cakes will rise while baking, and crash in the centers after being removed from the oven.  Serve warm with ice cream.


Robyn's notes: I took the first cake out of the oven after 18 minutes, leaving the other to cook longer, so we could taste each and decide which we preferred.  The first (photo above) rose to about a half-inch above the cocotte rim (both had been filled to about a half-inch below the rim), and crashed very nicely and evenly at the center.  It was a little bit too "uncooked batter" in the center for my taste, which I know is the point, but I like the mushy inside of these cakes to be almost like hot fudge, not like licking a beater.  The second, which cooked for about 21 minutes, rose quite high above the rim (almost a full inch), and didn't crash nearly as prettily, instead getting a large crack and subsiding halfheartedly in one direction.  The center was closer to my preference, though.  In step 3, where I say "whisk" the egg whites?  If you have access to an electric beater, use it.  Seriously.  I had to actually whisk because my mixer is unavailable at the moment, and not only does it take forever to whisk egg whites to stiff peaks by hand, it's very tiring.  The only benefits of doing it by hand are 1) the feeling of pride and accomplishment that lasts about 90 seconds upon completion; 2) the knowledge that you could do it if your power went out/that you're not as far removed from your homemaking great-grandmothers as you thought; 3) the tiny possibility of reduction in the jigglyness of your tricep.  If you'd like to add a little liqueur to this recipe, such as Amaretto or Kahlua, about 2 tsp should do it, and it should be added to the melted chocolate and butter before adding the egg+sugar mixture.  These cakes are very rich.