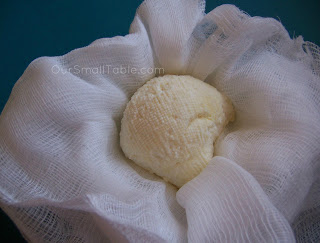 Last Wednesday I leaned over the bed to pull off the fitted sheet for washing, and immediately felt a series of spasms in my lower back.  I have a herniated disc that leads to sciatica, so this is not the first time I've experienced this, it generally happens about once a year.  This time I fell forward onto my face screaming from the pain, which is where I remained until my sweetheart got home and rescued me.  He moved me onto my back in bed with pillows under my knees, and I stayed there until Thursday morning when we went to the ER for stronger pain meds and muscle relaxants.  Monday was the first day I was truly up and moving around, but since it's best for this sort of back problem to keep moving as much as possible, I decided that today I'd make the most basic of cheeses.  Queso blanco is not a melting cheese, but it's good on crackers or bread, sliced and fried, or sprinkled over tacos or refried beans.  Read all my notes at the bottom before beginning, the recipe I followed was not perfect.
1.  Heat milk in a non-aluminum pot on medium-low heat for about 10 minutes (see notes, below) or until it looks like it’s just about to boil. If you have an instant-read thermometer, heat until milk is between 185°F and 190°F.
2.  Pour in lime juice. The curds will separate from the whey and the mixture will begin to look lumpy or grainy.  Simmer for 2-3 minutes.
3.  Pour the pot’s contents into a cheesecloth-lined colander and drain for 2-3 minutes.  Sprinkle curds with salt (see notes, below).  If desired, add herbs, spices, or chopped chiles (about 1/4 C of chopped chiles would be right, or about 1/2 Tbsp of fresh herbs.  Really it's whatever tastes best to you, you'd need to experiment).
4.  Gather curds in the center, tie the cheesecloth’s ends and hang the cloth on the faucet so it can drain for 4 hours or overnight.
5.  Untie cheesecloth, and store cheese in sealed container in the refrigerator.  It will keep as long as the milk would have, so note the expiration date on the milk before disposing of the packaging.

Robyn's notes: I used raw cow's milk because it's easily available, but as mentioned above, pasteurized is fine.  Ultrapasteurized should never be used for making cheese.  The recipe I was following phrased step 1 almost exactly as I've written it here, and since it didn't say whether or not to cover the heating milk, I left it uncovered so I could see better when it was getting close to a boil (I have many thermometers of various types, all are still in storage).  When, after 15 minutes, the milk was just slightly warm to the touch, I put the lid on.  Another 30 minutes later, it still wasn't coming up to a boil and I bumped the burner to a slightly higher heat.  Counting from the time I first turned on the stove, it took 50 minutes to get the milk to the proper temperature, and I've seen other people comment that they had the same experience.  A lot of this will depend on your stove, the size of the pot you use, etc.  Visually for me, the milk quickly got a yellow skin on top, and after all that time tiny bubbles started to form all across the underside of that skin.  When I poured in the lime juice I did give it a quick stir, but didn't agitate it very much.  The entire pot separated without my having to do so.  I only used two thicknesses of cheesecloth over my strainer, and I lost a lot of curds, so in future I'll probably use four thicknesses.  The recipe I followed gave no guidelines as to amount of salt.  It just said it was ok to use more than you normally would, because a lot of the salt will drain out as the cheese dries.  Since I didn't know how much "normal" was, I used about 1/2 tsp.  It was definitely not enough.  As I was draining in the strainer, I scraped the cheesecloth with a spoon in several places to help the whey drain out.  I would recommend not pressing with the back of a spoon, as that will just force the curds through.  The completed recipe worked, but the cheese was completely tasteless.  I've had queso blanco many times, and while it's a mild cheese it does usually have some flavour.  This did not.  Obviously if I'd added herbs, spices, or chiles it would have been different, and I will try that in the future and revise my rating if it improves.  For now I'm being generous in a 3 star rating, as so many of the instructions were vague and the final product tastes like nothing.