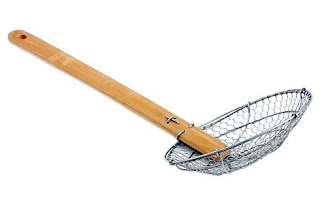 Generally, if someone told me there was a spider in my kitchen, my response would not be one of joy or excitement.  In our house the eight-legged kind get liberated instead of decimated (unless a cat sees them before I do), and the wire kind shown above get waved happily around like a magic wand.

A spider is a fairly simple tool, a straight handle with a shallow wire-mesh basket at the end.  It's not a kitchen necessity by any stretch of the imagination, everything it does can be done by other tools, but it's a great addition to your kitchen and it does its jobs better than the other options.  If you're making a holiday wishlist, a spider might be a good thing to include.

The most common use for a spider is to lift and remove food from hot water or oil.  Those of us who can and preserve can use it for moving blanched vegetables quickly from boiling to cold water.  It's also a great tool for gnocchi and any stuffed pasta, which should ideally be lifted from their cooking liquid instead of being poured into a colander.  Doing the latter can burst delicate pasta or crush gnocchi, while lifting them out individually with the spider is gentle enough to keep this from happening.  Spiders are sometimes referred to as basket skimmers, because they are very useful for skimming foam from stocks and soups.  Additional uses include fishing a bouquet garni or whole bay leaves out of a pot and deep frying foods.