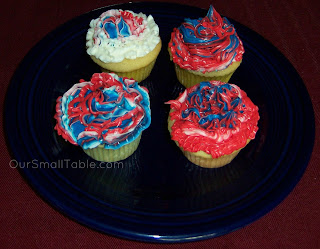 Since this recipe makes four cupcakes, there's enough to share with company if you're having a couple people over, or to keep all to yourselves and have the other two the next day.
1.  Preheat oven to 350°F.  Fit paper liners into 4 cups of standard muffin pan, set aside.
2.  Combine buttermilk and baking soda in small bowl, stirring to mix.  Gently whisk in egg yolk and vanilla.
3.  Place flour, sugar, and salt in medium mixing bowl, stirring to combine.  Add butter and half of buttermilk mixture.  Beat on low speed until dry ingredients are moistened.  Increase to medium speed and beat until mixture is lightened and has slightly increased in volume, about 45 seconds.  Scrape down sides of bowl as needed.  Pour in remaining buttermilk mixture and beat on medium speed until well blended, 20 seconds.
4.  Spoon batter into prepared muffin cups, dividing evenly.  Fill empty muffin cups halfway with water to protect pan.  Bake cupcakes 20-23 minutes, until toothpick inserted in center comes out clean and tops are just beginning to brown.
5.  Remove pan from oven and cool on wire rack for 10 minutes.  Remove cupcakes from pan and transfer to wire rack to finish cooling.  Frost as desired.

Robyn's notes: I found these to be a little bit eggy, and not as light as I would have liked, but still quite good.  For frosting, I used store-bought vanilla frosting in a canister because I was very tired.  I split the frosting into thirds, adding red gel food colouring to one bowl, blue gel food colouring to another, and leaving the last white.  I placed a large star tip into a piping bag (I actually had to use two bags, so ended up using a #20 tip and a #35 tip) and then spooned red frosting into one side of the bag, white into the center, and blue to the other side.  It was not easy, as can be seen by my results in the photo above.  The first cupcake I frosted was just getting white and nothing else, until finally the red and blue made their way to the tip.  The second cupcake (front left in photo) came out the best, but after finishing it and adding some colour to the first (back left in photo), I was out of frosting in that bag and had to fill another.  For that bag, the red came out great but the blue was hanging out at the top of the bag, not reaching the piping tip.  I think some practice would be good.  For this situation I'm happy with what I got, and doing it a few more times would help me figure out how best to load the piping bags.