How to Whip Cream 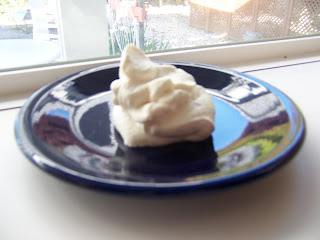 Take a look at the ingredients list of a package of whipped cream.  Don't have one nearby?  Here's what I found on the side of a tub of Cool Whip: water, corn syrup, hydrogenated vegetable oil, high fructose corn syrup, sodium caseinate, natural and artificial flavor, modified food starch, xanthan and guar gum, polysorbate 60, polysorbate 65, sorbitan monostearate, sodium hydroxide, beta carotene.  That's really not the slightest bit appetizing to me, and honestly I never have need of 8oz (more than 3 Cups) of whipped cream.  Interestingly, it takes less time to whip cream from scratch than it does to drive to the store and buy Cool Whip, assuming you have heavy cream in the house.

1.  About 10 minutes before you plan to start, place a whisk and a medium metal bowl in the freezer so that they'll be cold when you begin.
2.  Pour cream into bowl and begin whisking as quickly as you can keep up with.  Be sure to rotate the bowl so that you access every bit of the cream.
3.  As soon as you see the beginning of soft peaks forming (they'll look like wavy streaks), add the sugar and vanilla.  Continue whisking until soft peaks have formed, being careful not to overwhip.  The cream should hold its shape when dolloped onto something.

Robyn's notes: It's best to use a bowl that's somewhat deep, instead of one with a wide mouth, and keep in mind that the cream will about double in size, so pick a bowl that can accommodate that.  I can't give estimates on how long to whisk each stage because I'm relatively weak from my health problems, so the speed at which I whisk may be completely different from what someone else would do.  Just watch for the strength of the peaks and it should be fine.  This should be used right away, but if it needs to be refrigerated for a couple hours, just give it another quick whisking before using, to re-incorporate it all.  When I'm making an ingredient that calls for cream, I buy it in a one-pint carton and get a package of strawberries or raspberries or similar at the same time.  Then, when I've used as much cream as I'll need for the recipe in question, I can whip up most of the rest of the carton into whipped cream and serve it on fruit (or even as part of a quick fruit shortcake).  If you're used to Cool Whip, real whipped cream may not be sweet enough for your taste, in which case feel free to increase the amount of sugar incrementally until it's the way you like it.