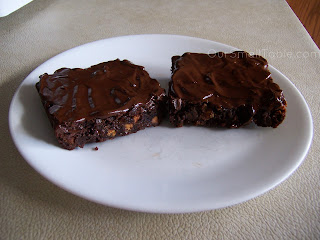 Today is National Butterscotch Brownie Day. This recipe is not a traditional butterscotch brownie, which is more of a blondie, having no chocolate to it. But, frankly, I'll take any opportunity to write a recipe that includes both chocolate and butterscotch.
Glaze:
1. Prepare baking pan: line a loaf pan with non-stick foil. Preheat oven to 350°F.
2. In a microwave, melt unsweetened chocolate and butter; stir until smooth. Cool slightly. In a medium bowl, combine sugar and chocolate mixture. Stir in egg white and vanilla. Gradually add flour to chocolate mixture. Stir in chips.
3. Spread into prepared pan. Bake at 350°F for 30-35 minutes or until a toothpick inserted near the center comes out clean. Cool on a wire rack.
4. For glaze, in a microwave, melt chips and butter; stir until smooth. Immediately spread over brownies. Cool before cutting.

Robyn's notes: Rich! This makes two large brownies and would probably make a good base for some vanilla ice cream. The photo above includes the glaze, so I'm also showing the brownies without glaze, as I know some people think it's not a brownie if it's frosted in any way. I used "non-stick foil", which is not regular aluminum foil. It's a more expensive version sold by the Reynolds company that doesn't stick to anything. I didn't test any other methods (greasing pan, regular foil, etc.) so I can't speak to how well they'd work, I can only say that there's a good amount of fat in the recipe and greasing the pan might mean too much. 3 stars instead of 4 because it really is so very rich that we won't be wanting it too often. 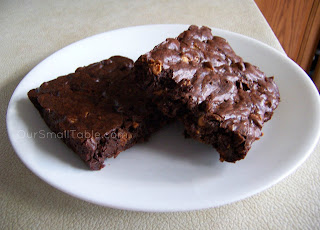