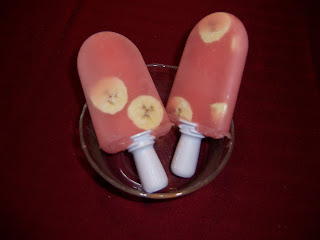 One of my xmas gifts this year was a Zoku Quick Pop Maker (Amazon link). It had been on my wishlist for quite awhile because one of the most frustrating things about my health problems is how often I have to be on a liquid diet. Liquid diets allow me to eat popsicles, but most popsicles don't have a lot of nutritional value, so I end up eating a Dreyer's Strawberry Fruit Bar once a day and drinking Ensure and juice the rest of the time. After a couple days of this, I am absolutely dying to chew things.

The point of the Zoku is that it takes ice cream maker technology and rearranges it to work for popsicles. The Zoku sits in the freezer empty (for at least 24 hours before you use it the first time, then just leave it in there between uses), then you remove it from the freezer, pour in the ingredients, and wait. 7 to 9 minutes later, you have 3 popsicles.

Now, I've read all the reviews, I know that the Zoku doesn't work fabulously with anything that has a low sugar content (or is made with artificial sweeteners), but I also know that I can use it to make a popsicle out of fruit juices or yogurt thinned with milk, and these are things that are staples of my diet when I'm not feeling well.

So far I've made four batches of popsicles with the Zoku. All have been edible, but there have been varied levels of success.

Batch one: strawberry Yoplait yogurt thinned with milk. Worked fine. Froze into a popsicle in about 8 minutes, wasn't terribly exciting but, then, strawberry yogurt isn't exactly the most exciting dish when it's in yogurt form.

Batch two: milk chocolate Ensure. I did this with the full expectation that it wouldn't work. Ensure is a nutritional drink (meal replacement), and while "sugar" is high on the ingredients list, the liquid consistency made me question its suitability for Zoku pops. I waited 11 minutes, then tried to remove the first popsicle I'd poured. It absolutely would not come out, which the instruction manual says is a sign that the sugar content is too low or the ingredients were too soft. I left that one alone, waited a 4 or 5 more minutes, then tried to remove the other two popsicles. Both came out fine. Again, they weren't exciting, but again the ingredient was something that isn't great when eaten in its usual form, so it wouldn't make sense to expect a popsicle made out of it to be fabulous. For the popsicle that wasn't to be, I filled the sink with hot water, placed the Quick Pop Maker into it, and the popsicle came out. The Quick Pop Maker had to refreeze for 18 hours or so after that intentional defrost before I could use it again.

Batch three: Naked Juice Power-C Machine. Another that I suspected might not work, because there's no sugar added. Since I love Naked Juices so much and I rarely get them (they're not cheap), I only filled one popsicle form with the juice. That way if it didn't work, I wouldn't have wasted the rest of the juice. Worked fine, froze in about 10 minutes. It was more noticeably tart as a popsicle than as a juice, but was still good.

Batch four: Kern's Strawberry-Banana with banana coins. Here I decided to branch out into the fancier popsicles. I sliced the banana coins very thinly, carefully placed them in the popsicle forms (difficult, because as soon as the banana touches the side of the form it freezes to it), then poured in the juice. It took about 14 minutes to freeze completely, but worked perfectly and tasted wonderful. The photo at the head of this entry is these strawberry-banana popsicles.

Overall, I'm very pleased with the Zoku. My biggest complaint is the need to separately purchase a popsicle storage container. Without that item, I have to either eat all three popsicles or make less than three at a time, because you can't leave the popsicles in the Zoku to eat later. Considering that a single serving of yogurt thinned with about 1/4 C milk (I didn't measure it) made 3 popsicles, it's not as if I'd be gorging myself to eat 3 at a time, but I would like to be able to eat one, then eat the next an hour later. Basically, the product is exactly what it's advertised as: a quick and easy popsicle maker.

No compensation received for this review, product was a gift from a family member and all ingredients were purchased by me. No endorsement by any named company is implied.
Whipped up by Robyn at 7:33:00 PM