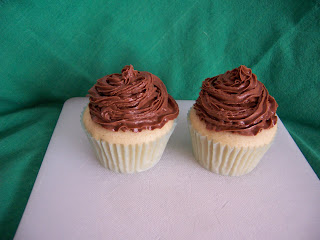 I wanted to try this recipe for Vanilla Cupcakes by How Sweet It Is, but I don't keep frosting in the house and I didn't want to have a bunch of frosting left over. So I looked at what was in the cupboard, and wrote this recipe for small-batch chocolate frosting. I have also included notes below on my experience with the cupcake recipe.
1. Cream butter in an electric mixer until fluffy, add vanilla. Slowly add powdered sugar with the mixer on low speed. Pour in melted chocolate and beat until incorporated. Add milk 1 teaspoon at a time with mixer on low speed, until desired consistency is reached.

Robyn's notes on the frosting: I used 62% cacao bittersweet chocolate. Note, bittersweet chocolate and unsweetened chocolate are not the same. Be sure you have the right ingredient. I ended up not using the entire 1/2 Tbsp of milk, but you may want the frosting thinner, so use as much of the milk as you need. If it gets too thin by mistake, add additional powdered sugar. The recipe made a bit more than needed, probably enough to frost three cupcakes, but definitely better than having an entire canister of frosting in the fridge.

Robyn's notes on the cupcakes: I find these cupcakes more like muffins, they're denser than I usually consider cupcakes to be, and several people in the comments on the linked blog post complained that their cupcakes were very "eggy". After 12 minutes of baking, my cupcakes were still liquid inside, I had to cook them for 17 minutes, and many comments over there mentioned cooking for up to 20 minutes. Be sure to fill the empty muffin tin cups with water, to keep your tin from warping. GF: cupcakes are not gluten-free! My gluten-free version will be posted soon. The frosting recipe is gluten-free.