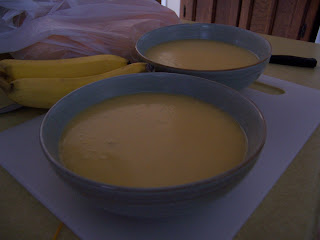 1. Melt the butter in a medium-size pot over medium heat. Add the onion and cook for about 5 minutes, stirring occasionally, until it begins to soften. Add the flour and stir constantly until it is fully absorbed. Add the broth and water and turn up the heat to high.
2. While the soup is coming to a boil, peel the potato and cut into 1/2 inch cubes. Add to the pot. It will take the soup a few minutes to return to a boil. When it does, turn down the heat to low, cover, and cook for 20 minutes, or until the potatoes are soft enough to be mashed.
3. Turn the heat off, and mash some of the potatoes into the broth. The rest can remain in cubes to vary the soup's texture.
4. With the heat still off, add the cheddar cheese and stir for 1 to 2 minutes, or until the cheese has melted. Season with black pepper and serve.


Robyn's notes: made this a second and third time without the onion, worked out very well. Not terribly exciting, but a good potato soup option for me, since I'm not allowed celery or onion. The third time I made it I sprinkled crumbled bacon on top, which makes it (obviously) not vegetarian but which added a nice flavour.