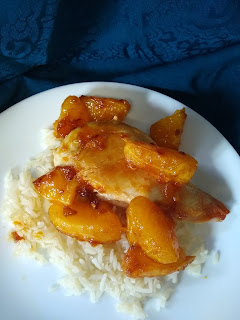 1.  Sprinkle chicken with salt.  In a medium skillet cook chicken in hot oil over medium heat for 8 to 10 minutes or until chicken is done, turning once.
2.  Meanwhile, finely shred enough of the orange peel to measure 1/4 tsp; set aside.  Peel orange. Cut orange in half lengthwise; cut crosswise into slices.  In a small bowl, combine shredded peel and orange slices. Add orange marmalade, ginger, and if desired, crushed red pepper; toss gently to coat.
3.  Remove cooked chicken from skillet, cover and keep warm.  Reduce heat to low.  Add orange mixture to the skillet.  Cook and stir for 30 to 60 seconds, or until marmalade is melted and mixture is heated through.  Serve the orange mixture over chicken.