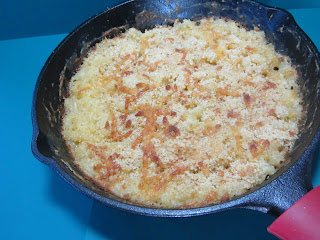 If you really want nice crunchy browned cheese bits around the edges of your mac n cheese, a cast iron skillet is the way to go!
1.  Preheat oven to 350°F.  Cook pasta until not quite cooked through, about 5 minutes.
2.  In 8 inch cast iron skillet, melt butter over medium-high heat.  Add flour and whisk constantly until combined and just starting to brown.  Do not overcook flour.  Add milk all at once, whisking constantly.  Continue whisking until thickened.
3.  In small bowl, combine 1/4 C of cheese with breadcrumbs.  Set aside.  Add cheese to white sauce and stir through to combine.  Stir pasta into sauce, top with breadcrumb mixture.  Bake at 350°F for 18-20 minutes until hot throughout and browned on top.

Robyn's notes: if desired, the pasta can be cooked in the skillet first, instead of in a separate pan.  For me, the weight of the cast iron, combined with how shallow it is, makes me nervous about carrying it full of boiling water and pasta to the sink to drain.  But I have done it, so I can promise it's possible.  I got mostly set up to do this and only then realized I was out of regular elbow mac, so instead of going back to the store I used gluten-free.  Barilla brand gluten-free elbow mac, while oddly translucent in the box, tastes the same in this recipe as regular pasta.  Watch me demonstrate this recipe on youtube!