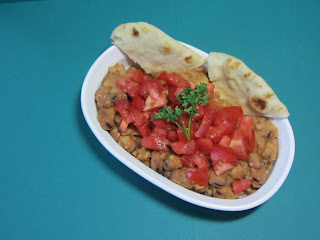 This is originally an Egyptian dish (going way, way back), which has become popular in other countries as well, such as Sudan and Syria.  In those places it would be cooked long and slow, from dried beans instead of canned.  It's often sold as street food, and in some neighborhoods shop owners will all gather together at mid-morning and have a shared meal from one large pot of Ful.  It's pronounced "fool" and has various spellings.  This is a very streamlined version, to work well in a small home kitchen.

1.  In a medium saucepan, bring beans with their liquid to a boil, reduce heat to low, simmer for 10 minutes.
2.  Meanwhile, in a small bowl, combine garlic, cumin, paprika, lemon juice, and salt.
3.  With a slotted spoon, remove fava beans from their cooking liquid to a mixing bowl.  Partially mash the beans, leaving most intact.  Gently stir in the lemon juice mixture.  If necessary, add some of the cooking liquid to keep the mixture wet, but not soupy.
4.  Transfer to a shallow serving dish, drizzle with olive oil, and top with tomato and parsley.  Serve with flatbread.

Robyn's notes: other traditional accompaniments include lemon wedges, hard-cooked eggs, crumbled feta, and cucumber slices.  I was surprised at how hard it was to find fava beans in my area.  I did eventually get a couple cans at an independent market a few towns away that specializes in "world cuisine".  More urban areas will likely find it less difficult.  They can be purchased online, but I chose not to go that way because I could only buy them by the case.  Watch me demonstrate this recipe on youtube!