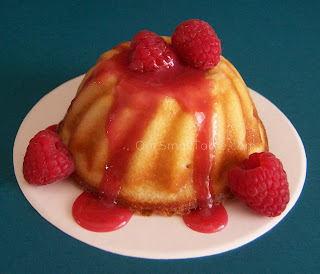 America's Test Kitchen is cooking their way through the 20th century this summer, one week per decade.  They've invited readers to participate by making the provided recipes and then submitting a photo of themselves with the finished product.  The first week is titled Cook Like it's 1905! and as soon as I saw the recipe I knew I'd be making it and then figuring out a smaller version.  Everything it called for was already in the house, and I'd recently picked up a couple of mini tube pans using a gift card from my sister.  As you can read at the above link, at the turn of the previous century homeowners were distrustful of the new gas ovens and unlikely to buy them.  As a selling point, manufacturers marketed the gas oven as a time-saver: no pre-heating necessary!  The America's Test Kitchen Cold-Oven Pound Cake Recipe that is the first challenge is formulated for an oven that's cold when you put the pan in, and so my reduced version is as well.  I used two mini tube pans for this, and while I can't guarantee success with another pan, I suspect that two mini cake pans would work as well, because the mini tube pans don't actually have a tube running all the way through, just a divot.  Since my pans are nonstick, they needed no greasing or flouring.  If not using a nonstick pan, be sure to do both!
1.  Adjust oven rack to lower-middle position.  Combine flour, baking powder, and salt in bowl.  Whisk milk and vanilla in measuring cup.
2.  With electric mixer on medium speed, beat butter and sugar until fluffy.  Beat in whole egg, then remaining egg, until combined.  Reduce speed to low and add flour mixture in 3 additions, alternating with 2 additions of milk mixture.  Mix on low until smooth, about 30 seconds.  Use rubber spatula to give batter a final stir.
3.  Divide batter between two mini tube pans and smooth tops.  Place cakes in cold oven.  Adjust oven temperature to 325°F and bake, without opening oven door, until cakes are golden brown at the edges and toothpick inserted in center comes out clean, 38-42 minutes.
4.  Cool cakes in pans for 15 minutes, then turn out onto rack.  Cool completely.  Serve.  (Cooled cakes can be stored in airtight container at room temperature for up to 2 days.)

I served with a drizzle of Raspberry Curd and some raspberries.

Robyn's notes: Unfortunately I was not at all pleased with the results of the full-size contest cake.  Since it makes so many servings, I waited until my folks came by, so they could help us eat it.  This means my mom was around to watch me make the cake, and she confirmed that I followed that recipe to the letter.  The final cake had good flavour but was the most solid and dense cake I have ever eaten in my life.  I lifted a corner of the cooled cake off the plate and when I dropped it you could actually feel the reverberations in the table.  As we brainstormed what the problem may have been, we finally thought to take a look at my baking powder.  Sure enough, it was a year out of date.  My guess is that since the rise is relying on baking powder, mine being old (has now been tossed and replaced) kept it from happening properly.

As for my version, it is again a much denser cake than I would like, as I made it the same day and using the same baking powder.  Because it's small, that outcome of my version is more acceptable to me than the full cake.  The density is not as noticeable because it's a smaller proportion of cake that feels heavy.  I feel confident that when I try this again with fresh baking powder it'll be more successful.  Yes, this does need to be done with an electric mixer, otherwise it'll be nearly impossible to get enough air beaten into the batter.  Even though I'm one of those people who never sift if I can get away with not, I sifted my cake flour before measuring it because it had been in a drawer for so long that it was really clumpy.  The one-and-a-half Tablespoons beaten egg is the equivalent of half a large egg.