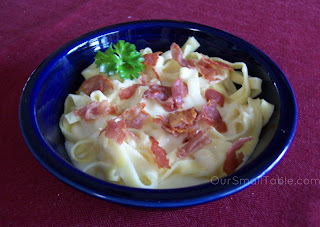 Many years ago, I lived near Phoenix and had very little money.  One of the problems with having very little money in the southern half of the state of Arizona is that for much of the year "hot" doesn't even begin to describe the world around you, and running air conditioning to a livable level is expensive.  With an upstairs apartment on the sunny side of the building, it was especially difficult.  So I spent a lot of time at the library and whatever bookstores were nearby, reading and letting them pay the utility bills to keep me cool.  On one of these trips to a bookstore, I was flipping through one of those fancy "lifestyle" magazines that describes a lifestyle I'm not convinced anyone actually has, and there was a long article about the superiority of having your cook make her own pasta.  It included enough information to be interesting, but not enough to actually make the pasta without further instructions.  A pretty picture of the pile of flour with eggs nestled into its well, then a picture of the completed dish.  Admonitions to dry each hand-cut length of pasta over coated hangers around your kitchen, with no guide as to how long they would take to dry, how to cook them as compared to box pasta, or how long they'd remain shelf stable.

I was young enough to be entranced by the article.  Oddly, the recipe for Alfredo Sauce in the magazine was basically complete.  I was already carrying a small notebook in my purse at all times back then, so I furtively scribbled out as much of the article as I could without the bookstore employees noticing that I was copying info from a magazine I couldn't afford to buy.  The next time I changed notebooks, I copied those pages into it, and continued that for several years before ever getting around to trying the sauce recipe.  This is the descendant of the Fettuccine Alfredo shown in luscious two-page spread in a magazine I've long forgotten the name of.  Although I have made pasta occasionally in the years since, this recipe doesn't call for homemade.  I'm not generally well enough to put that kind of time in, and there are many good box pastas available.
1.  Cook pasta according to package directions.  Meanwhile, melt butter in a medium saucepan over low heat.  Add cream and heat, stirring constantly until combined.  Stir in Parmesan and pepper until smooth.
2.  As pasta is draining, and with the sauce keeping warm over low heat, brown prosciutto in small skillet until crisp, being careful not to burn.  Spoon sauce over pasta and top with browned prosciutto and a little extra Parmesan if desired.

Robyn's notes: Dry long pasta, such as spaghetti, fettuccine, angel hair, linguine, or vermicelli, can be measured by holding them together in a bunch and wrapping a string around the bundle.  4 ounces being approximately 1 inch in diameter, the string should be a little more than 3 inches around the bundle.  You can buy long pasta measures from kitchen supply stores, which have marked holes of varying diameter, keep a string that you've marked off 1 inch lengths, or use a measuring tape.  It may seem as if there's not enough sauce to go around, as American restaurants tend to drown pasta in sauce, but this is not a sauce that you want gallons of.  If you use real imported Parmesan, which I prefer to do anytime I can afford it, the sauce will have some sweet undertones.  The prosciutto, being such a salty meat, helps cut through that.