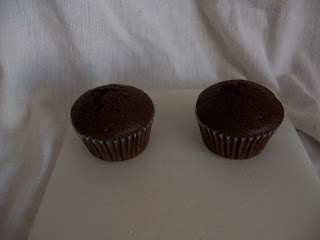 After I made my Chocolate Cupcake Duo, an adaptation of this recipe by How Sweet It Is, I realized that the cupcakes were very similar to the chocolate chocolate chip muffins that we used to get when we had a Costco membership. This recipe is almost exactly the same as my earlier one, just a couple minor changes.
1. Preheat oven to 350 degrees. Line a muffin pan with 2 liners.
2. In medium bowl, add egg white and sugar and beat until combined. Add vanilla and melted butter and stir until mixed. Add flour, cocoa, baking powder and salt and stir until smooth. Stir in milk, then chocolate chips. Divide batter equally between the 2 cupcake liners.
3. Bake at 350 for 16-18, or until cake is set. Let cool completely.

Robyn's notes: I didn't even check the muffins until they'd baked for 18 minutes.